The past 3 months has just flown by and here I am back at work from maternity leave.  I want to take some time to share the story of my journey to motherhood in the hopes that it will inspire other women who have had or may in the future have a similar experience.

My husband and I were blessed this Valentine’s Day with a robust, healthy baby boy named Gabriel who has changed our lives forever.  Like many women I thought that the day I gave birth to my child would be the hardest part of becoming a mother. In many ways it was, it was certainly the most physically intense day(s) of my life. I had a very successful (though prolonged) home birth attended by 2 midwives, their student and my husband. My labor lasted about 36 hours, which included a 3.5 hour 2nd stage (pushing). I can only describe this as feeling like I was trying to push a boulder uphill with my pinky finger.  In the end I made it to the top of the hill and was rewarded with the glorious sight of my baby boy, screaming and pink. What came next were without doubt the hardest weeks of my life.

I expected to be tired after giving birth. However, the actual experience of how exhausted I was surprised me. After the immediate euphoria of the birth wore off I found that I could barely stay awake for the newborn exam.  My lovely newborn son also had not been able to latch despite being put to breast within the first hour of his life. This meant that after getting about 4 hours of sleep, my husband and I were up literally around the clock syringe feeding him donated breast milk (for which I am eternally grateful), pumping to try to stimulate my milk to come in, and of course changing and burping him. After the first day a nipple shield was introduced and Gabriel was able to feed at the breast using a naso-gastric tube inserted under the nipple shield at one end and attached to a syringe with donated milk at the other end. We continued this for 2 more days until my milk finally came in and I could simply feed him at the breast with just the nipple shield. Yay!

However, this method of feeding had its own challenges.  The shield must be cleaned thoroughly between feedings and sterilized every day, it takes practice and patience to use it properly, and complicates the already difficult task of learning how to breastfeed. There is also the issue that it slows the emptying of the breast and can reduce the milk supply. Gabriel was slow to return to his birth weight and so I was advised to pump and feed him the expressed milk (3-4 times per day) to supplement his growth, especially while using the nipple shield. While all this was happening I was of course basically bed-ridden, bleeding, sore from the birth and not having any sleep, so an additional 30-50 minutes per day of pumping was daunting. I was distraught that I might not be making enough milk for my baby, concerned that I might not be able to breastfeed for a year as I had planned, and a little worried that I might lose my mind.  I was lucky to have my wonderful, patient and supportive husband there to help me through this difficult time who, even as I write this is telling me that I haven’t fully captured how incredibly challenging that period of time was.

Gabriel was evaluated by 2 different lactation consultants for tongue tie to try and find out why he couldn’t latch and both assured me that if he had one it was mild and shouldn’t be preventing him from latching. However, despite daily attempts, he wouldn’t latch without the nipple shield. It was theorized that due to his long labor he had muscular tension in his neck and upper back which might be making it difficult for him to open wide and so we started taking him to appointments for PT. Weeks flew by and finally after 6 weeks of what seemed like endless work a physical therapist mentioned to me that she thought he was tongue-tied based on her experience with her 5 children.  I made an appointment for Gabriel the next day to have a frenotomy and he was feeding without the nipple shield that evening.

My experience with breastfeeding since Gabriel’s frenotomy has been like night and day. I felt like I could finally relax. I could stop pumping. My painful, recurrent clogged ducts disappeared and I could spend more time just enjoying my baby. Gabriel started gaining lots of weight and sleeping for longer stretches.  My advice to anyone struggling with breastfeeding issues is to find a great lactation consultant and don’t give up!  It’s worth it in the end. Ask for help! I received excellent care from my midwives who kept coming back to my home to help me through my difficult postpartum period and keep track of Gabriel’s weight.  It has been an amazing journey thus far and I can only imagine what’s still to come. 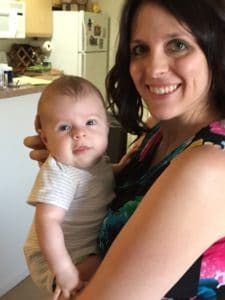 Please fill out the form below and we’ll get back to you with the best options to get started on achieving your aesthetic goals.

Please fill out the form below and we’ll get back to you with the best options to get started on achieving your health goals.